Walking Dead Samurai Swords of Michonne for sale feature an accurate replica of the one used by Michonne in the hit AMC series The Walking Dead. This replica follows traditional katana hand forging technique and is an officially licensed replica. 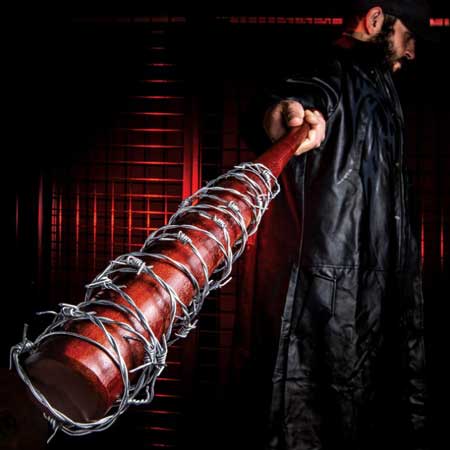 The Lucille Bat is inspired by the bat seen in the popular series The Walking Dead. This hardwood bat is wrapped in genuine barbed wire. The stainless steel wire is spiked for an authentic look. Lucille measures 31 inches in all and has a 2 inch diameter at the largest part. Use caution when handling this item. 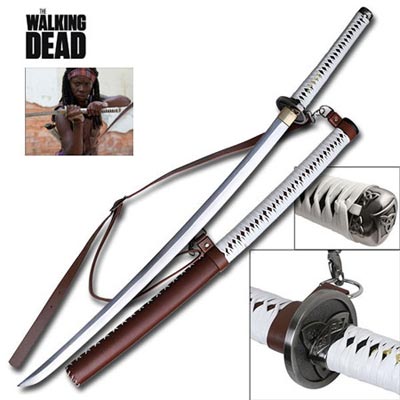 Walking Dead Swords for sale are part of the collection of officially licensed movie and TV items available. These samurai swords are modeled after the one carried by Michonne in the series The Walking Dead. The swords measure 42 ½ inches in all. They feature an unsharpened full tang 27 inch 1045 high carbon steel katana style blade. The handle is traditionally wrapped in white leather and authentic black rayskin. The metal fittings were replicated from the studio prop used by Michonne in the series. The wooden scabbard is wrapped in brown leather with a white leather overwrap. These swords have a leather carrying strap. This officially licensed samurai sword is etched with the Walking Dead logos on the blade. Buy these beautiful Walking Dead Samurai Swords for only $179.99. 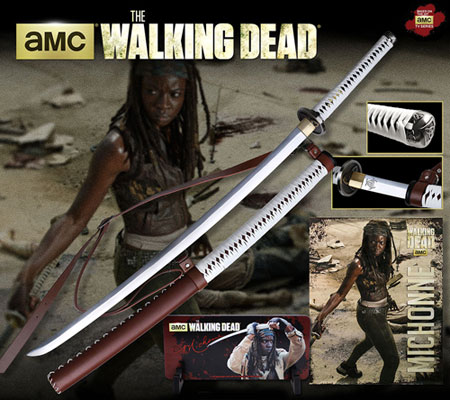