Viking Swords for sale include a wide selection of styles made by popular manufacturers. Many of these Viking Swords are inspired by real swords that were wielded in medieval Europe. Blade options available include functional, display and blunt reenactment. Buy all types of Viking Swords, axes and more. 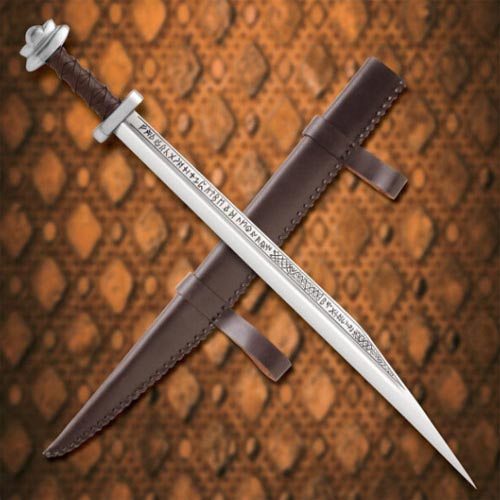 Viking King Seax Swords are 29 ¼ inches in all. This traditional Seax is modeled after a real Viking Sword that was on display at the British Museum. The sharpened 23 inch 1065 high carbon steel blade is decorated with letters from the Runic alphabet. The real leather-wrapped handle provides a sturdy grip. These Viking Swords also include a genuine brown leather scabbard which features two back-belt hanging straps. The sharp blade is 1 3/8th inch wide. The Viking King Seax weighs 2 pounds, 2 ounces.