Isildur Swords from The Lord of the Rings 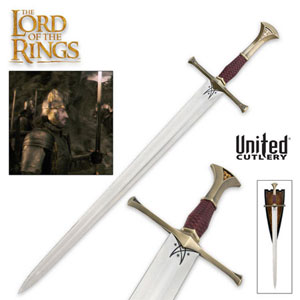 Lord of the Rings:
Isildur Swords

Officially licensed reproduction sword from The Lord of the Rings. This is sword of Isildur, who cut the One Ring from Sauron's hand with the broken hilt of his father's sword, Narsil. Isildur chose to keep the One Ring rather than destroy it. This item is meticulously recreated using 420 stainless steel for the blade, which offers a heavy blood groove down its length. The cast metal handle features leather wrapped grip and pommel bearing the One Tree image. 36 1/2" blade, 47 1/2" overall. United Cutlery, UC2598.