Ringwraith Swords from The Lord of the Rings 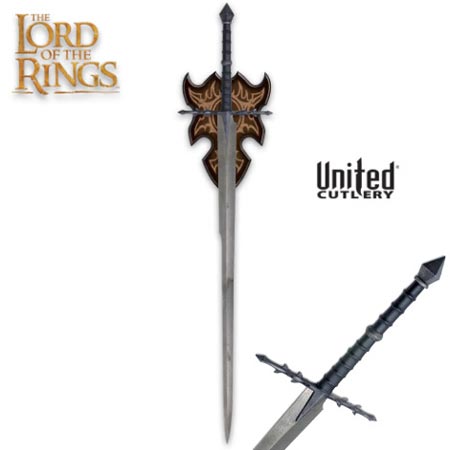 Officially licensed Ringwraith Sword is a giant 54 inches in all. These accurately detailed replicas are reproductions of the actual filming prop used in the Lord of the Rings movies. These massive swords feature an authentic battle-worn solid metal crossguard and pommel. They have genuine, real leather-wrapped grips and rat-tail tang construction. The 39 ¾ inch blade is crafter of acid-etched, tempered 420 J2 stainless steel blade that has a false edge. The Ringwraith Sword is ready for display and includes a free wooden display plaque. The plaque is silk-screened with the mark of the Eye of Sauron, master of the Ringwraiths. These officially licensed movie collectibles also include a certificate of authenticity.