Hadhafang Swords from The Lord of the Rings 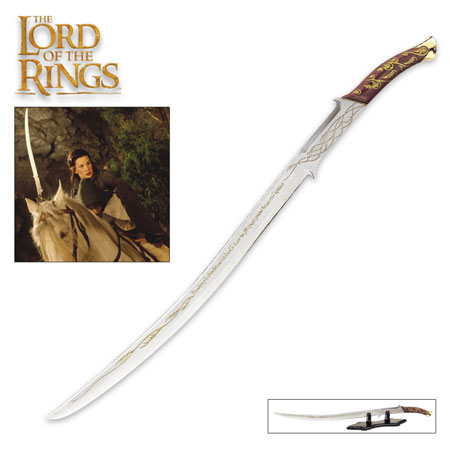 Arwen Evenstar Swords for sale are exact replicas of the Hadhafang seen in the Lord of the Rings movies. These officially licensed movie swords measure 38 1/8th inches in all. The 30 inch sharpened blade features runes laser etched upon it. The blade is crafted of 420-stainless steel. The grip of the Hadhafang Sword is made of solid wood. Similar to the real sword used by Arwen Evenstar in the movie, the grip of the Hadhafang is accented with an ornate Elven vine design and a metal pommel. These swords include a wooden tabletop display stand. They also include a Certificate of Authenticity that identifies them as part of the collection of officially licensed collectibles from the Lord of the Rings movies and The Hobbit films. Buy the Hadhafang, Sword of Arwen Evenstar for $229.99.