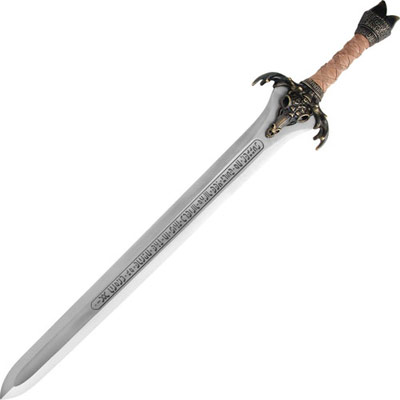 Officially Licensed Conan the Barbarian Father’s Swords for sale are 38 ½ inches in all and weigh 6 pounds. These functional swords are hand forged from 1085 high carbon steel and tempered. The 29 inch blade has a factory edge but can be sharpened. The center of the almost four inch wide blade is engraved with an intricate rune pattern. They feature the same design as the swords seen in the film including the highly detailed guard and pommel. The 4 ¾ inch grip features a pattern of genuine suede. Made by Windlass, these swords include a certificate of authenticity certifying them as officially licensed movie replicas. Buy the Conan the Barbarian Father’s Swords for only $299.99.