300 Rise of the Empire Themistocles Swords

300 Rise of the Empire movie pieces for sale include all the popular Spartan replicas. Shop and buy the officially licensed Themistocles swords, helmets and the legendary Dagger of Artemisia. Collectibles from the original 300 movie for sale include the Sword of Sparta, Infantry Helmets, King Leonidas Helmets and the famous Spartan Shield. These are officially licensed 300 Movie replicas from the novel by Dark Horse Comics and the popular films 300 and 300: Rise of an Empire. The licensed replicas include certificates of authenticity. Also offered for sale are Spartan spears and all types of Roman, Greek and Gladius swords. 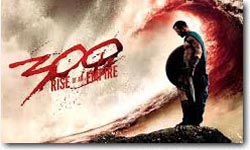 Themistocles Swords for sale are 30 ½ inches in all. The Themistocles Swords are officially licensed swords from the movie 300: Rise of an Empire. The hand forged and unsharpened 23 ½ inch 1065 high carbon steel blade is 2 ½ inches wide and 3/16th inch thick. They feature an antique bronze finish and weigh approximately 1 ¾ pounds. They include a free solid wooden wall display plaque. Buy the Themistocles swords for $159.99.