Pirate Swords for sale are available in a variety of designs. Decorative and display cutlasses are light and an ideal choice for awards and ceremonies. Cutlasses and cupped handle designs are popular for costumes, pirate themed weddings and for stage. Buy all types of pirate swords, scimitars and cutlasses for display and reenactment all on sale now. 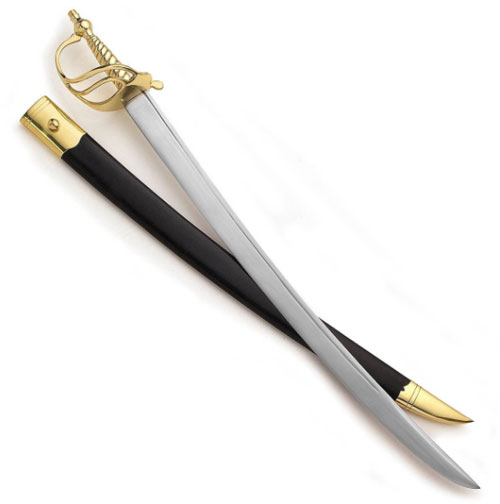 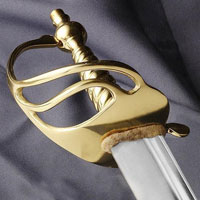 English Cutlass Swords for sale are 30 ½ inches in all. The English Cutlass Swords are popular pirate swords that are designed after real swords that were used in the 17th and 18th centuries by sailors. These swords were also referred to as hangers and were used for close combat by military officers due to their relatively compact dimensions. The English Cutlass features a 25 ½ inch high carbon steel blade. The tough and tempered functional blade is 1 ½ inch wide and 1/4th of an inch thick. These swords feature a solid brass heart-shaped guard a feature similar to their historical counterparts. These pirate swords are hand forged and handmade and. They include a leather scabbard that has a real brass throat and tip. They weigh 2 pounds 8 ounces. Buy the handsome and historical English Cutlass Swords for $129.99. 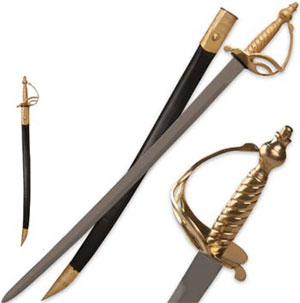 1776 Battle of Bunker Hill Swords for sale are 30 inches in all. These swords are modeled after a real military sword that was used during the famous Revolutionary War battle. This modern version features a 24 inch carbon steel blade. They have a brass-colored metal pommel and hand guard. The leather covered scabbard has brass colored fittings. Buy 1776 Battle of Bunker Hill Swords for $69.99.