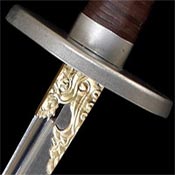 Miao Dao Swords for sale are a Chinese long saber that measures an incredible 57 inches in all. Swords like this Miao Dao, or grain leaf saber, were used in the mid-16th Century to combat pirates raiding coastal cities. They were by used by the Invincible Qi Army led by General Qi Jiguang and became coveted by soldiers due to the potency and effectiveness of the sword. These swords feature a functional, 34 ¾ inch blade made of 5160 high carbon steel. The wooden core, 18 inch handle is traditionally wrapped in leather and accented with a brushed stainless steel pommel and guard. A bronze-colored head of a dragon forms the blade collar which makes the sword appear as though the blade is emerging from the mouth of the dragon. The scabbard has a textured brown lacquer and a brushed stainless steel belt ring, chape and throat. Buy the Dragon King Miao Dao Chinese Long Saber Swords for $599.99.